Why is There a Labyrinth on My Business Card?

If you have no idea what I’m talking about, I hate to say it buuuut… you might be living under a rock.

And for those of you who are in fact living in that luddite xerox colony under that rock next to the fax machine, Quick Response Codes – commonly know as QR Codes – are 2D black and white square matrixes that can be scanned on your smartphone (iPhone or Android) by using an app (such as RedLaser).

When decoded, these UPC-like barcodes can prompt your smartphone to do nifty things like:

The list of possible consequences goes on and on. You get the point…

Think of it like this: anything you can do on your smartphone can be prompted by the scanning of a QR Code. Can you say, “Advertiser’s Dream?” Large and small businesses alike have been starting to use these codes as the backbone of their marketing campaigns to engage with customers on a whole new level.

Some of the most creative ones I’ve seen to date are: 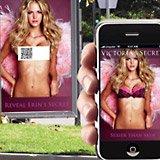 Scanning these QR codes entice users to unlock “Victoria’s Secret” and see what’s underneath the sexy pin-up girl images. Although unconfirmed, the billboards have been rumored to have caused a few fender benders… 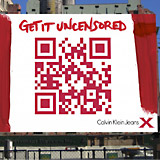 Calvin Klein really took the “less is more” approach to heart when launching their Fall 2010 Jeans campaign. No images, just scan their code. Passersby without smartphones had no way of knowing what these ads were all about. Suddenly, VIP status was given to smartphone users who could scan and watch CK’s racy, 40-second video instantly on their mobile devices. 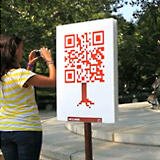 This campaign is an amazing mobile interactive experience that creates engagement and raises awareness for city parks; basically turning New York City’s Central Park into a real-life board game. You could nerd out to facts about the park, discover scenes from movies shot there or unlock park history – all by scanning various “parkodes.” Balboa Park, take note! 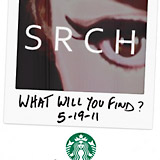 Earlier this year, the world’s biggest coffee shop teamed up with the world’s biggest pop star to launch “SRCH;” a digital scavenger hunt which involved scanning QR codes at participating Starbucks stores and searching out clues for a chance to win cool prizes (which coincidentally promoted Gaga’s new album and Starbucks’ new lattes) Check out this recap of Round 1 to get an idea of how the game was played: http://www.starbucks.com/blog/1020 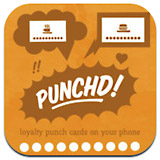 Punchd! is a mobile replacement for buy-10-get-1-free punch cards. Its an app that runs on your phone and keeps track of all your punches to ensure you get that free coffee/ sandwich / oil change you’ve been splurging for. No more toting around dozens of cards in your wallet or forgetting them at home. Simply scan the punchcode next to the register at participating shops to record your “punch.” I just scanned my first punch last week at Moto Fuco Cafe, what what!

So What’s the Payoff? Why QR Codes?

Traceability: the best part about running a QR Code-based campaign is that they’re 100% traceable. By creating unique URLs you can easily track all of your QR code campaigns in Google Analytics. For more info on how to track your QR campaigns check out this post by Red Clay Interactive.

Bottom Line: Love ’em or hate ’em, QR Codes aren’t going away – especially with the iPhone 5 WAIT! I mean iPhone 4GS just out of the gates. I challenge all you Luddite laggards out there to stop judging the aesthetics of those funky digital labyrinths popping up everywhere…and start decoding!

And here’s a couple related links to get you talking QR Codes like a pro at that next nerd convention after party:

Getting Unique with QR Codes

31 Brands with Some of the Best QR Code Campaigns